“Can a thing wholesome, entire, be made in a kiss, an embrace? Oh my blindness to clutch the dividend!” – Montri Umavijani

These are the words accompanying Fleur de Lalita, the new creation of Parfums Dusita Paris, a prestigious perfume house founded by Pissara Umavijani, also daughter of the renowned Thai poet Montri Umavijani. A short poem that praise the greatness of a sentiment that is inherent even in the simplest of gestures: love. 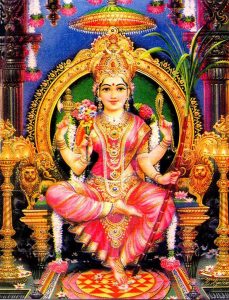 There are many ancient cultures in which the concept of creation is ascribed to a Mother Goddess, the very essence of a strong, protective, compassionate and wise feminine nature, capable to combine into a single entity the connotations of an unconditional love, being sacred and profane, divine and carnal at the same time. Perhaps the most complete representation of this concept comes from Hindu cosmology and the figure of Sri Lalita (“She who plays”), the legendary Goddess of creativity and trine personification of mother, daughter and wise elder, expression of the forces that govern life, in a sequence of creation, preservation and destruction. Also known as “Empress of desire”, Lalita is the emblem of a spontaneous and conscious femininity.

Fleur de Lalita is a tribute to the Goddess in every woman, a vision of a beauty that mutes and evolves and, freed from matter, she vanishes into the ether, into a dimension where her essence rises to the light of a new existence, gently cradled by a heavenly perfume. Her flower is an ode to the sacred feminine, celebrated through a joyful, sensual and refined fragrance. 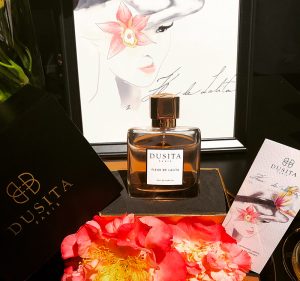 The heart of Fleur de Lalita is a feast of white flowers that slowly unfold, making their way through a green, aromatic and slightly balmy opening of galbanum entwined to the floral-lemony radiance of magnolia. The indolic and intoxicating flow of Sambac jasmin weaves amid the lush foliage of a primordial paradise, bringing a touch of carefree innocence to the overflowing vitality of the opening notes. Sweet maidens, lily’s puruty and Grandiflorum Jasmin’s elegance veil the sinuous figure of the Goddess, whose feminine sensuality is enlivened by the intense carnal charme of tuberose and by the graceful poetry of may rose from Grasse. Legends singing of her long, flowing dark hair adorned with flowers of Champaka, Ashoka and Punnag echo in the exotic sweetnes of vanilla absolue and ylang ylang. From the fragrant unison of soft petals, a voluptuous accord of ambergris and ambrette seeds comes forth, evoking the comeliness of a smooth sunkissed skin, whose perception is made almost tangible by the creaminess of tonka bean and Mysore sandalwood. The iridescent and elusive vision of an unearthly inflorescence resists for hours, consuming itself on the skin. There remains the awareness of that instant of pure and radiant beauty, like a promise that is renewed, complete and entire, in the ephemeral magnificence of a flower that slowly fades, to bloom again, eternally. Fleur de Lalita.

The fragrances of Dusita collection, can be purchased in selected boutiques and perfumeries or  directly from Parfums Dusita web site. In case you wished to immerse yourself in the fragrant paradise created by Pissara Umavijani and delight in exploring the fragrances of the collection, you can also visit the Parisian Boutique of the Brand,  that has been recently opened at 11 Rue de la Sourdière, side street of Rue Saint Honoré, Paris.

#sotd #cinquanta by @santamarianovella1612 The pr


Error: API requests are being delayed. New posts will not be retrieved.

Error: API requests are being delayed for this account. New posts will not be retrieved.

This website uses cookies to improve your experience. We'll assume you're ok with this, but you can opt-out if you wish.Accept Read More